We designed an original academic gown for the graduation ceremony of the first graduating class of Komatsu University, a public university that opened in April 2018.

Academic gowns are traditional ceremonial wear commonly worn at educational institutions in Europe and the United States. We wanted to design a new gown to represent Komatsu University, which implements advanced education aimed at fostering human resources which plays an active role locally and abroad.

The kimono utilizes a design based on flattened rectilinear patterns with straight cuts, exhibiting a perfect harmony between efficiency and beauty. We wanted to reflect the values of kimono design by composing a simple yet intricate design that changes its impression depending on the wearer's physique and personal styling. The design was developed by closely studying structural relationships of the human anatomy. The proportions between elements such as the depth of sleeve cuts and the layering of the fabrics played a vital role to achieve a "looseness" that allows it to be worn over kimono for ceremonies.

The process of creating something complex from a simple shape is similar to the practice of Origami. The hood, which is added as the degree level increases, was designed in the manner of folding a fan using Origami.

The material is based on KONBU, a firm, colorful fabric made of condensed nylon fibers, developed by local textile manufacturer Komatsu Matere. Paper-thin, sharp edges were realized through the treatment of the edges, the attachment of fixing elements, and the cutting and sewing of the fabric. 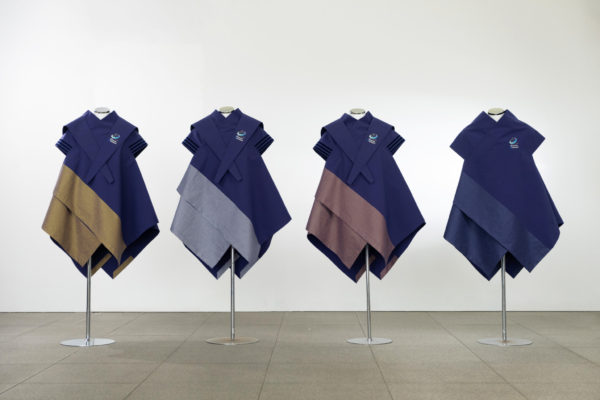